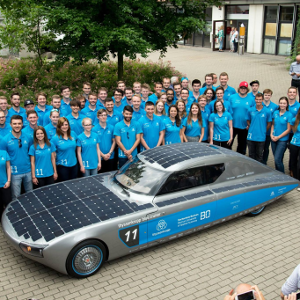 45 solar cars racing on sunshine only will compete in the Australian outback from October 8th – for over 3000 kilometer. They fight to win the World Solar Challenge (WSC), the world championship of solar cars.
The organizing team published the official list of participants on July 6. From 16 Asian Teams 4 are Japanese. The US will send 7 out of 9 solar cars from the Americas. Only one of them from South America. Host Australia is strong with 7 participating solar cars. Two teams come from Africa. The 11 European teams come from the Netherlands (3), UK (2), Sweden (2), Germany (2), Poland (1) and Belgium (1). Having 2-10 support vehicle each the 46 participating teams will build a huge bunch, starting from Darwin, heading south. It’s good to know that Stuart Highway is wide enough for everyone.

The solar car teams from 24 countries come from technical universities around the world. The present not only their cars but also the quality of the education program. Teams from University of Michigan and Stanford University will be present. From Germany RWTH Aachen with the “Huwei Sonnenwagen” and the HS Bochum driving the “Tyssenkrupp blue.cruiser” are on the starting list. Surprisingly the teams GAMF/MegaLux from Hungeria (7.th at WSC 2015) and Onda Solare from Italy will not send a car.

To build a car just for this race takes time and money. The reward is a unique peace of work, full of innovations. During the last weeks most of the teams unveiled their solar car. Do to the new regulations of the WSC the young engineers build wonderful revolutionary designed solar cars. Especially the “Wing” from Japan and “Stella-Vie” from the Netherlands impress.

The blue.cruiser from Bochum also is a beauty. It’s a 4×4, looks like a sports car, but fits for 4.

English is a Challenge

I’m not a native writer. The posts at perpetu-blog will be mostly in German. However, my aim is to provide some general information about the WSC also in English. Please check my list of participants of the WSC 2017, which gives you (almost) all the information about the teams and the cars available. For further interest the blogs MostDece and Scientific Gems, provide valuable and detailed information.